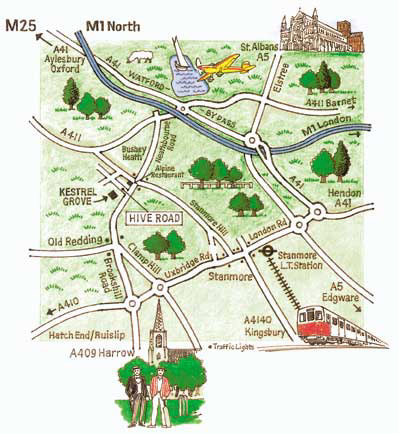 Kestrel Grove was the former headquarters of Fighter Command at Stanmore and has close links with the R.A.F. and Bentley Priory which was central command. Bentley Priory organises guided tours of the building and talks on their main duties during the Second World War. There is also the Hendon Museum close by which houses many planes associated with the R.A.F since flight began.

Elstree Aerodrome is open to the public and has a restaurant and café for those wishing to watch the activities of the airfield which are mainly light aircraft and helicopters.

For those with Grand Children or even Great Grand Children there are two local “open farms” with catering facilities. Willows Farm situated at Colney Heath, near St Albans, provides a full open farm with exhibitions on a daily basis such as sheep dog trials, falconry and “a day at the races” and provides free rides, bouncy castles and safe play areas. Battlers Farm is located in Radlett providing gift shops and restaurant, more appropriate for those with elder children. Aldenham Park is by the Elstree Reservoir, which hosts a small farm and a Winnie the Pooh trail but is in the main a picnic area ( picnics can be arranged ) overlooking the reservoir on which dinghy sailing is prolific.

St Albans town centre is some 5 miles away and hosts the Cathedral and Roman remains all of which are open to the public.

The Grimsdyke Hotel, Old Redding, once owned and occupied by Mr Gilbert, of Gilbert and Sullivan, hold evenings to celebrate their music. An evening meal is followed by a light operetta.

The local garden centre, Gardens Etc, is 300m down the road and is fully accessible for wheelchair users. Afternoon tea can be taken in their restaurant facilities. There is also an aquarium centre on site, for those interested in tropical and fresh water fish.

Our dedicated team are here to help, every step of the way

Get in touch
This site uses cookies: Find out more.